Madrid Capital FinTech (MAD FINTECH) is now a reality. On 21 February 2020, the largest FinTech cluster in Europe was launched under the impetus of Madrid City Counciland with the leadership of the ECOFIN Forum, through itsCírculo Ecofinworking group.

The Vice-Mayor of the Madrid City Council, Begoña Villacís, was the godmother of the act of adhesion to the cluster, which added a hundred companies to the 30 members of the FinTech Circle. For Villacís, certainty, legal security and freedom are essential for doing business: “We have a very lively, highly competitive city where 2,000 companies are created every month. This is going to be Madrid’s moment, where we all fit”.

The Vice-Mayor of Madrid, Begoña Villacís, sponsoring the presentation of MADFinTech, and broadcast by Telemadrid.

The head of Madrid City Council’s Department of Entrepreneurship, Employment and Innovation, Ángel Niño, was responsible for opening the event on a day he described as “historic for Finance”.

“We are one of the cities with more early adoptersin almost all sectors”, explained Ángel Niño. “We want the FinTech ecosystem to grow and be exportable. We position ourselves as the largest financial innovation hub in Spain,” added Niño.

Following this, the Director General for Financial Innovation of the Bank of Spain, Carlos Conesa,gave a framework speech in which he stressed that “initiatives such as this cluster are a very valuable tool. Madrid is in a privileged position to promote this type of activity”. Conesa also discussed the sandbox that is underway in Spain and “which could arrive in a very short time”, and referred to the newly created cluster as a very valuable complement to the sandbox.

Kick off of Madrid Capital Fintech

The Delegate of the Economy, Innovation and Employment Area of the Madrid City Council, Miguel Ángel Redondo, officially presented MAD FINTECH. For Redondo, “Madrid is by far the main destination for foreign investment”. “We are committed – continued Redondo – to entrepreneurship and innovation and we believe in public-private partnerships”.

For his part, José Luis Moreno, Director General of the Economy of Madrid CityCouncil, stated that “Madrid is the business-friendlycontainer in the FinTech sector, a container with added value. And the role of the Town Hall is to contribute to this friendly ecosystem with creativity”.

The president of the Ecofin Forum, Salvador Molina, added that “this cluster wants to be a facilitator of meetings, synergies, co-creation and open innovation”. “It is open to any company or entity that wants to reinvent financial services”.

During the day, the conclusions of the ten Reflection Groups of the FinTech Circle were presented, led by the heads of the ten TopTen FinTech 2020companies that are protagonists of technological disruption in the Spanish and international financial world.

Regarding the financial services Marketplace, Laura Boisán, from Bnext, stated that “it is now possible to do business outside the cash desk” and that “we are in “the revolutionary 1920s”.

Francisco Sierra, from N26, stated in relation to Challenger Bank-Mobile Banking that “it is clear that the future of banking is mobile”. Jorge Bardón, from Creditea, considered the “importance of supporting investment and innovation from the public administration, which also has to digitise”, in terms of credit to individuals.

Ana Asuero, from Aplázame, was in charge of presenting the conclusions of Consumer credit. Next, Francisco Amián, from Tesoriza, explained from the Financial services to companiesthat “there is a vast opportunity to improve the efficiency of companies from the data and communication. But there are challenges such as accessibility, functionality, legal security or cyber security”.

Antonio Cantalapiedra, from Woonivers, reported from LegalTech and explained that “when you try to make a company serve users, there are obstacles that do not allow you to climb, and this leads to many companies going bankrupt”.

Juan Antonio Balcázar, from Housers, as leader of the PropTech group, focused on the potential of the Blockchain and stated that “new technologies are already changing the construction of the property and the way of relating to the client”.

With respect to InsurTech,Rodrigo Rueda, from Life.Box, indicated that it is the turn of the reinvention of Insurance, “a transversal industry towards other industries”.

Finally, he closed the October Grégoire de Lestapis round, which spoke of credit to companies, declaring that “SMEs are aware that they have to diversify their sources of financing”, and defined the banking of the future as “open, modular and tailored to each client”.

MAD FINTECH brings together commercial companies, financial entities, associations, training centers and institutions, both public and private, that carry out activities in the Madrid area with a global vocation and that freely associate to promote the development of the FinTech ecosystem (technology finance) in Madrid and from Madrid in an international projection.

See the news on TeleMadrid 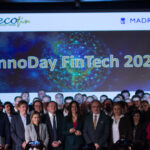 Photo caption:Carlos Conesa, Director General of Financial Innovation at the Bank of Spain