The Madrid Capital FinTech (MAD FinTech) cluster has offered 8 different visions of FinTech at Madrid Platform, the largest international business hub between Europe and Latin America, held in Madrid from 11 to 13 May. A recording of the event is available on YouTube.

Salvador Molina, president of MAD FinTech, presented the conference and each of the speakers. Furthermore, in his opening speech, he highlighted MAD FinTech’s vocation for national and international alliances: “Together we add up to more; that is why the MAD FinTech cluster cooperates with all the clusters that seek to promote FinTech”.

1. The FinTech card for seniors

The first vision was provided by Luis Castillo, CEO of SeniorLeading and chairman of MAD FinTech’s Silver Economy Committee, who explained the SilverMoney project, an inter-generational FinTech shopping ecosystem, which enables seniors over 60 to generate monthly income in the bank accounts of their children and grandchildren over 18. The income is obtained through the discounts obtained from the purchases of all SilverMoney members at all SilverMoney merchants. In his presentation, Luis Castillo underlined this message: “We must see the elderly as generators of wealth. Their consumption is 13% higher than the average. It is a very interesting segment for FinTech to focus on”. 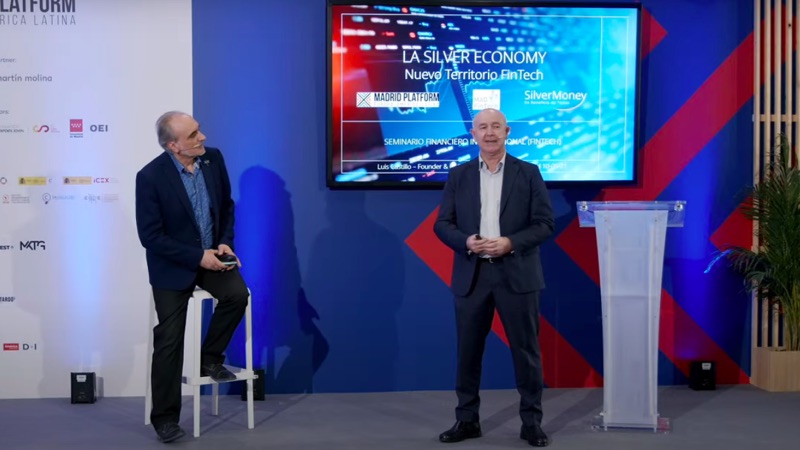 2. The future belongs to super apps

Secondly, Javier Castrillo, CIO of Tatum, presented the project to bring super apps to Madrid, which combine social networking and messaging, QR payment methods and marketing on a single platform. He explained how Alipay and Wechat are the only applications used to make payments in China, where he has lived for 16 years. During this time, he has seen how Chinese society has changed and concluded with this reflection: “The joke has changed and China is now the innovator. In the United States, the means of payment are independent of BigTech. In China, they are completely integrated. That is the difference. That’s why the future belongs to super apps.

3. The FinTech environment as a catalyst for female leadership

Blanca Jiménez Anabitarte, partner BIP Financial Services, has advanced the first conclusions of a report, carried out by the MAD FinTech Gender Economy Commission on ‘The impact of and from women in the FinTech economy, which will be presented in the coming weeks. Blanca Jiménez argued that “no organisation can do without 50% of its talent” and that “in the FinTech environment, 60% of the talent is female, and half of it in management positions”. “This is not a battle of women against men, but of society for society, to build those companies that see a better future,” she concluded.

4. Longevity, a challenge and an opportunity

Roberto Rubio, general manager at Óptima Previsión, has offered different proposals for building a Liquidity for a 100 Year Life‘ and, in particular, he referred to the reverse mortgage, which is already regulated in Spain and can serve to improve the quality of life of our elderly, who have a home equity valued at 630,000 million euros. There are 9.2 million people over the age of 65 in Spain, of whom 8.2 million are homeowners. “People have a lot of savings invested in their homes, and we have to find ways to access this wealth and improve people’s lives so that they can do what they want,” concluded Roberto Rubio.

5. The wiki era of the banking/insurance ecosystem

Manuel Zaera, Deputy General Manager and Chief Customer Officer (CCO) at Nationale-Nederlanden, focused on the power of collaboration in the digital age, and how Sparklab has fostered innovation within N-N, through three tools: human-centric design, design thinking and engagementecosystems. Nationale-Nederlanden’s ecosystem has been created with different players with whom together they create more value than separately. Manuel Zaera ended with “an invitation to collaborate and create more ecosystems than the ones we have in order to advance and improve the industry”.

Esteban Granero, CEO of Olocip, which he founded five years ago with two university professors, has defined Artificial Intelligence as ‘doping the scientific method’. “The answers change as a function of generating new knowledge, and here Artificial Intelligence has the ability to generate knowledge through three superpowers: speed, memory and objectivity,” he explained. Therefore, AI makes it possible to describe and organise data to create new knowledge and anticipate circumstances. “Know in order to predict and make decisions with less uncertainty,” he concluded. In this sense, he has defined the Banking and Insurance sector as a great data collector but a bad data exploiter.

7. The new standard in general insurance

Juan Antonio Costa, country manager for Spain and Portugal at Duck Creek Technologies, explained that the new standard refers to three pillars: reinventing the business, transforming while continuing to create and innovating the customer experience. “It no longer makes sense to internalise some services, but to create an ecosystem that communicates with your platform,” said Juan Antonio Costa.

8. The FinTech you take with you

Finally, María Zarco, board member & Chief Operating Officer (COO) of Woonivers, which she defined as “the only FinTech that you take on a trip”, because it has integrated the Tax Free model, which was anchored in the same bureaucracy of the 80s, into an app, streamlining procedures and payments. “A 90-minute process is reduced to 10 minutes, with a 100% digital shopping experience,” he summarised.