The Digital Enterprise Show (DES) 2021, the main meeting point for the digital sector in Spain, counted with the participation of MAD FinTech in several of its expert panels, in the first face-to-face event of IFEMA.

At the opening ceremony, Salvador Molina, president of the cluster, hosted the Public Administrations Forum of the Digital Enterprise Show (DES) throughout the morning and afternoon. A meeting focused on the digitisation of the Public Sector as a lever for the digital transformation of the country, its companies and its citizens.

At the meeting she introduced Carme Artigas, Secretary of State for Digitalisation and Artificial Intelligence, who said that the pandemic “is an opportunity to accelerate the process of digitisation of the Public Sector and facilitate accessibility and service to citizens”. 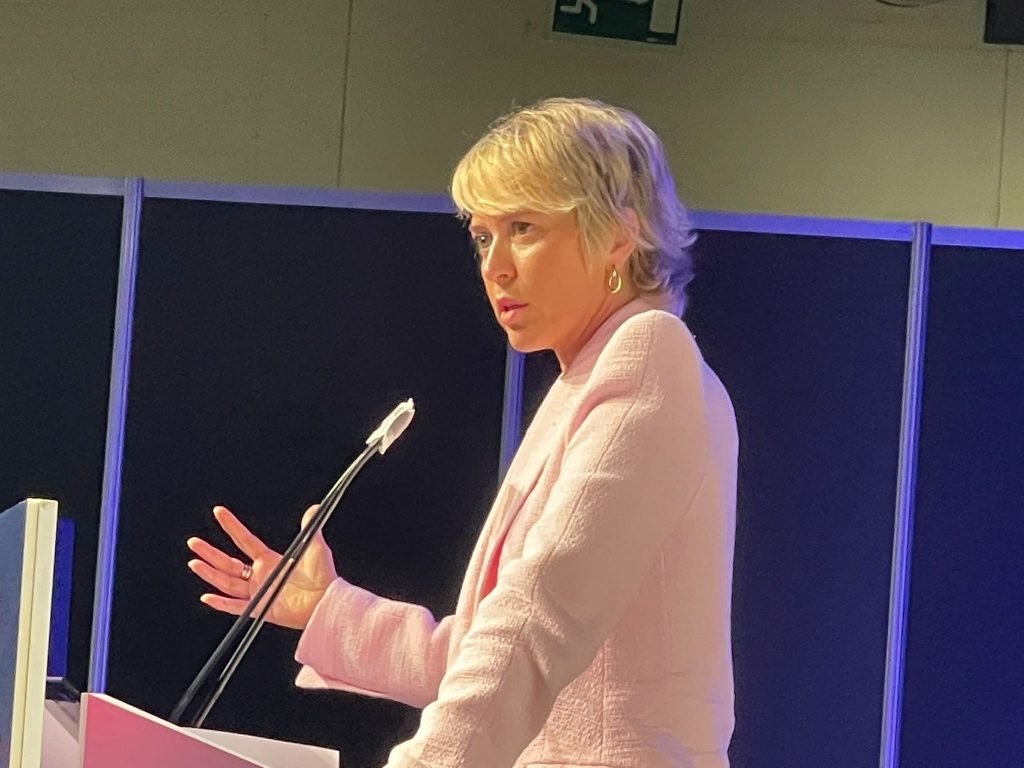 Carme Artigas, Secretary of State for Digitalisation and Artificial Intelligence.

Carme Artigas highlighted the good health of the digitisation of public administration in Spain, well above that of other European countries in the region. The country ranks eleventh in digital development in the DESI index and second in broadband and digital government, with 85% of citizens doing business online, compared to 50-60% in other major countries. During the pandemic, there has been a 500% increase in online transactions. “Overnight, this scalability was achieved by civil servants teleworking from home, something they had not done before,” Artigas said.

For the Secretary of State, the digitisation of the public sector, although advanced, still has some way to go. “We have the challenge of identifying the ten main procedures that companies and users carry out with the Administration in order to simplify them,” he explained, with the intention of “making the Administration a source of agility, not bureaucracy”.

However, Artigas highlighted a worrying fact: 43% of citizens lack basic digital skills. “This hampers any plan we want to make for the reconstruction of our country,” he explained, although the government has launched the National Digital Skills Plan as “key” to “national reconstruction” after the pandemic.

In this Plan, linked to the European NextGenerationEU funds, public-private collaboration will be fundamental. Particularly if one considers that the objective is to move towards a digital and sustainable economic model.

Salvador Molina (at the lectern), together with Rodrigo Tilve, Vice-Minister of Economy and Competitiveness of the Community of Madrid, and Carme Artigas, Secretary of State for Digitalisation.

Rodrigo Tilve, Vice-Minister of Economy of the Community of Madrid, joined the Secretary of State. “The digital transformation requires a strong effort that needs resources”, explained Rodrigo Tilve during his speech, who called for “reflection, debate and the generation of ideas on how public administration should generate a more positive impact on society”.

Deputy Minister Rodrigo Tilve highlighted the role of the Madrid Capital FinTech (MAD FinTech) cluster as an entity that advocates this model of public-private collaboration, giving as an example the collaboration of the Community of Madrid with this initiative promoted by the ECOFIN Forum and the Madrid City Council, which is now working to advise member companies on how to apply for European funding.

Salvador Molina himself stressed that these public-private collaboration actions “mark the fabric of this ecosystem that we are developing in the digital economy”, which is the most powerful tool for the country’s reactivation once the pandemic is over.

On the other hand, Salvador Molina, president of the cluster, participated as a speaker in a special panel on intrapreneurship at the Digital Enterprise Show (DES), where he unveiled the keys to intrapreneurship as a tool for corporate innovation and sustainability.

Salvador Molina, during his participation in the DES 2021 intrapreneurship panel.

“Intrapreneurship is a cultural fact. The way organisations are built is not just a matter of procedure or training, but a matter that permeates all the people who make up the organisation, something we call ‘culture'”, explained Salvador Molina after being introduced by Elena Arrieta, Director of Communications at DigitalES.

Intrapreneurship is a little-known phenomenon in general, which is causing companies to miss out on real opportunities for growth and positioning in new sectors. The aim is to “facilitate innovation within the business world”, in the words of Salvador Molina. In other words: “Allowing new companies, businesses and even incubated competitors to be born within the corporation itself by empowering the talent of the workers themselves”.

This phenomenon, popular in US BigTech companies, is intimately linked to the entrepreneurial ecosystem and, as Salvador Molina explained, is usually faced with barriers that cause them to fail because they are not known, accepted and internalised from the outset in the organisation at all levels. These four maxims for successful cultural transformation are:

Google is the most intrapreneurial organisation in the world because embedded in its own corporate view of business is the “Risk Assumption Principle” signed by its two founders: “We will not shy away from high risk in the pursuit of high reward projects because of the pressure of short-term profit. Some of our past bets have gone extraordinarily well, and some have not. We will continue to pursue them because we recognise that the pursuit of such projects is the key to our long-term success”. A commitment sealed by fire and signed by Larry Page and Sergey Brin.

Alongside this, there is a trident given to every Google worker that makes it invincible:

And promises have real substance in terms of time and money. Google allows 20% of its employees’ working time to fulfil their dreams, try out ideas they have come up with or seek to develop a company or new business within Google itself. And for this, after validation, they have the technical resources of the company and a bonus of a thousand dollars to attract the help of a partner to encourage. This is how intrapreneurship is possible!

Without having to go to a company of the size and characteristics of Google, it is enough to look much closer to see how intrapreneurship even has success stories in Spain. Salvador Molina gave the example of BilliB, a FinTech that emerged at an Everis employees’ breakfast, and which they later proposed to the consultancy firm to start up from within. Everis employees also became partners in the project, thus stimulating the intra-entrepreneurship formula.

Everis agreed and a first company called Nettix was created to develop the technological tools. But in the commercial and business proposition, it was found that the market was not mature and there were certain barriers to entry to build a large clearinghouse of invoices for and against. So, after this stumbling block, it was time for a stride forward.

Far from giving up, Everis and its intrapreneurs gave the project a new chance and refocused their first business model without fear. The name and brand were even changed, giving rise to the current BilliB, as a formula for invoice management and liquidity generation.

Now, yes. Billib started to be a success story and, shortly afterwards, Bankia became a business partner and ended up becoming a shareholder of the company as well.

And so we come to the current crossroads, where Everis (now NTT) and Bankia (now CaixaBank) will have to choose between: continuing with the joint venture, or buy out the other or even facilitate an MBO (Management Buy Out) so that the entrepreneurs themselves acquire ownership of the spin-off created by Everis as an example of intra-entrepreneurship.

For such a process to be a success like BilliB, it is not only necessary to imbue organisations with an ideology of entrepreneurship and collaboration, but also to lose the fear of change and failure.

Salvador Molina gave as an example the collaboration between ‘big and small’ that takes place in the MAD FinTech cluster, where large corporations do not hesitate to co-create new realities together with startups that were once viewed with suspicion, if not indifference or fear.